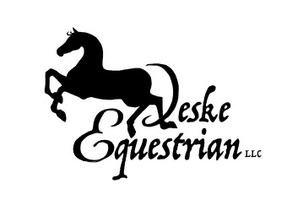 Jeske Equestrian- training for you and/or your horse!

Jeske Equestrian- training for you and/or your horse!

Dressage and then some

My philosophy is simple.  Make it easy for the horse to find the right answer.

We are so lucky to be allowed the privilege to work with such a powerful and majestic creature. Unfortunately, they don't speak the same language and really could care less about leg-yields and half-passes.  A wise person once personified the horse and said, "What does this have to do with eating grass?"  Humans are the ones who ask the questions: "Will you bend and move off my leg?" "Can you jump this obstacle?"  How we communicate that to the horse in the most simplest of cues, ignore mistakes, and reward correct responses, the quicker and more consistently the horse will answer with a "YES!"

That all sounds so easy doesn't it? It's been a journey.  I've been blessed with instructors and horse-teachers who have led me to where I am today.

My riding began as a little girl whose infatuation with horses grew from riding at summer camp to working nearly full time at Marlys Bell Stables in Stillwater, MN.  Marlys taught me how to ride saddleseat, first on her school horses, and eventually on my very own American Saddlebred, Anacacho's Stardust, "Star".  Marlys also taught me about how to be a perfectionist when it came to grooming and tack cleaning.  I learned to clean stalls, sweep cobwebs, manage training  and show schedules.  I learned about caring for injuries, and the sad side of dealing with horses.  She gave me everything a young teenager needed to stay stable and grounded, with a strong work ethic and the desire to be a life-long learner.  Star and I had our share of successes, but we primarily hung out in the 4th place range.  He was beautiful, but not nearly as extravagant as the other Saddlebreds on the circuit. It broke my heart to sell him when I left for college.

I took classes in college that introduced me to the other areas of English riding, including some jumping.  As a saddleseat rider I had made fun of the tall boots, but I learned an appreciation and love for the perfectionism of the sport.  I had also grown to realize that I would never in my lifetime, be able to afford another American Saddlebred that would put me in the ribbons.  So years later, as I struggled with a highly sensitive National Show Horse named Fraser, I turned to a dressage instructor to help him develop relaxation over his topline.  From there I was hooked.  I struggled with show nerves, and rode a bit like a woodtick (legs all curled up), but I persisted.  Fraser taught me the finesse I needed, and my next horse taught me about using the correct aides (he was a bit lazy and not nearly as well-built for dressage).  Put the finesse and correct aides together and I was a perfect match to move quickly up the levels with Stuart.  I had begun working with trainer Brad Cutshall of Landmark Farms, in Kalamazoo.  It's his teaching that really made everything understandable and obtainable.

In-between all of this I was running my own boarding/lesson/training barn, and was provided with so many horse personalities that showed my strengths and flaws.  It's hard to blame the horse, when the same mistake is happening in eight of the horses I rode!  Every single one teaches me something new! I'm grateful they've brought me where I am now.  My goal is to get my USDF gold, but that's never the end!  There's always more to learn, and that's the best part of this journey!